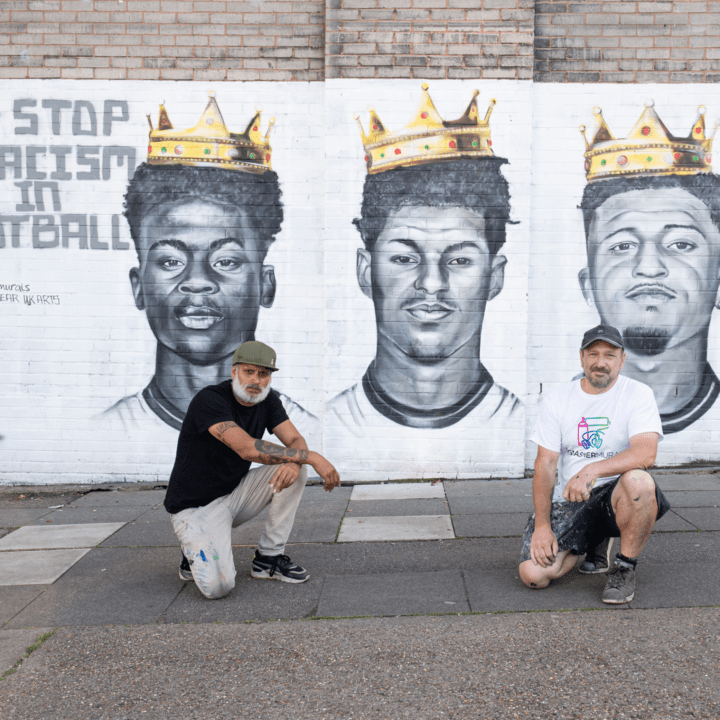 Have you been anywhere near the North Mall this month? If not, you need to pay it a visit. What was a blank canvas is now home to a statement piece of art uniting youth within local communities. The ‘Three Kings’ (England football players Bukayo Saka, Marcus Rashford and Jadon Sancho) have now appeared.

Simon, a local graffiti artist from Blingwear, felt it was his duty to help the local community and create the piece within Edmonton. “When communities stand together, amazing things happen. This wasn’t about art for me but a symbol of unity and to encourage young people today to remain united. This was the only thing I could do.”

He created the piece alongside fellow Blingwear artist Gnasher who really understood what Simon was trying to achieve and how he wanted to help the community.

“We wanted to create a movement. I’ve seen it being posted on social media and people talking about it. People are even coming into Edmonton just to see it. That was the aim. This isn’t about stopping racism in football but once and for all.”

In light of the online abuse and racist insults aimed at some of the England football players the talented duo has created a very inspiring mural for the community to enjoy and reflect.

Rebecca Bird, our very own Retail Manager, said: “When Simon approached us to create the work, we were more than happy to support and stand together on this. It is a very strong image with an equally powerful message.”

It’s for all to see so pop down and have a look. We’d love to hear your thoughts. Pop it on your socials tagging us and #3kings #stopracism #bunracism